. The noble goal of this series is to give the American reader an unfiltered look into the rich regional culinary history and recipes of Italy, and it is off to a great start.  Although Sicily by Giuseppe Coria is actually the 2nd volume in the series, my Sicilian roots attracted  me to it first (nothing personal against Puglia of course). Sicily often gets the short end of the stick when discussing the cuisine of Italy, only recently here in America are chefs and cookbook authors starting to give it the attention it deserves. Coria is the perfect guide to this island’s unique and robust cooking and food culture.  He doesn’t just present us with a list of recipes, but gives us history and context, punctuated with great stories.

The introduction gives an overview on how the history of Sicily and all of the different cultures that have occupied it over the years have contributed to molding the cuisine. The book is then broken down by region representing the provinces of Messina, Catania, Siracusa  and Ragusa. All 4 of these cities are actually on the east coast of Sicily, so the original Italian title of the book, La Cucina della Sicilia Orientale (The Cooking of Eastern Sicily) might be considered more accurate. But, this is a minor quibble, because Coria’s history covers the whole island and the recipes capture the spirit of Sicilian cooking in general.

Each section starts off with a brief overview of the region it covers, then the recipes are organized by category, first courses, meat dishes, fish dishes, etc. Even the typical cheeses produced in each province are discussed. The two recipes I am reprinting here, Pasta a la Norma and Mussel Soup are from Catania and Messina, respectively. There are many other excellent recipes from all 4 regions in this book, including a Holiday Ragu from Ragusa and Fish Soup Siracusa-Style. It is also a very nice looking book with great pictures of Sicily and it’s ingredients.

My parents are from Francavilla di Sicilia which is right between, Catania and Messina. I showed this book to them for a quick authenticity check. My mother went straight to the Pasta al a Norma Recipe, read it and exclaimed, “They got it right!” My father after reading it had one question, “Can I have it?” Two pretty strong seals of approval. Sicily: Culinary Crossroads is a must for anybody interested in the gastronomy of Sicily. 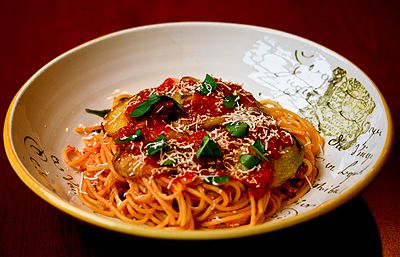