The Great Cherry Pepper Hunt of 2011 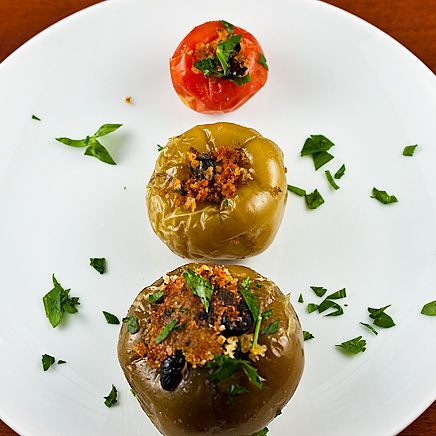 The week after Christmas, I was chatting with my friend Mark on IM. He was telling me about the Christmas Eve fish dinner his Mother (she is originally from Naples) made. He was running down the list, Linguine con Vongole, Fried Calamari, etc. While it sounded like a great dinner, it didn’t really excite me that much, because I am allergic to shellfish. But, all of a sudden he said “Vinegar Peppers stuffed with anchovies.” I stopped him dead in his tracks, I had to know about these peppers. As he told me about the stuffing, my mouth started to water: bread, anchovies, olives, pignoli. I had to make them.I had one question though, what kind of peppers? I figured they weren’t hot cherry peppers, but you never see sweet cherry peppers in the store anymore. He told me they were the sweet cherry peppers, but they are really hard to find. His mom keeps an eye out for them all year long, the ones she used this year (Sclafani brand) she bought in June! Still, I figured I could find them somehow, so I needed the recipe. Mark promptly got her on the phone, and transcribed the recipe into IM:

Not exactly a precise recipe, but that’s pretty much how my father always gives me recipes, so I could work with it. Now I had to procure the hard to find sweet cherry peppers. I knew I could probably order them over the internet, but I wanted to try finding them in a store if I could, for two reasons: first I didn’t want to have to pay for shipping, which can be kind of high with food products. Second, the thrill of the chase!

I tried every local supermarket, nothing. Checked deli’s and food specialty stores. Even called places I knew carried Sclafani products, “You mean Hot Cherry Peppers,” they asked? Talking to me like I was a Martian. Having no luck, I turned to the Internet. I found the Sclafani Sweet Cherry Peppers here and ordered them. I got a PayPal payment confirmation email and nothing else.

After over a month, I called the contact phone number, and got a guy on a cell phone. He informed me that the only place they are shipped from was in North Carolina, and they had been closed down since the Holidays due to a snow storm, and he did not know when they would be shipping. He then told me that if I ever wanted to order again to just call his cell phone instead of using the web site, and he would take care of me.

Needless to say, I was not confident they would ever come. So, back to the internet. I found Mezzette brand cherry peppers at www.buythecase.net (they are not there anymore), and ordered a case. They came within a couple of weeks, but the peppers were tiny and I was worried they would be too small, and a pain to stuff. The very next day the Sclafani’s showed up at my doorstep.

I decided I would try both, the tiny Mezzete peppers and the larger Sclafani. Even though the small ones were a little tougher to stuff, I got the hang pretty quickly, and I have to say I preferred them to the larger ones.